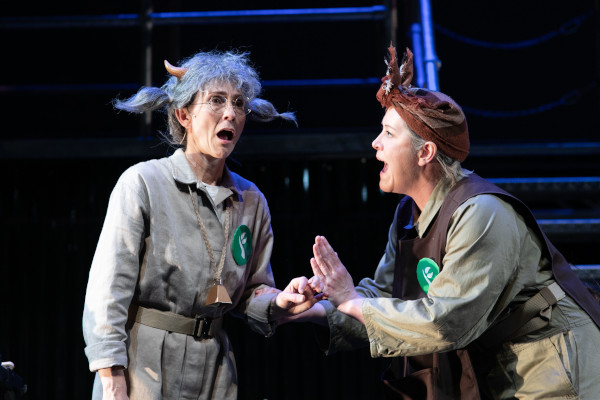 George Orwell’s Animal Farm is one of those classics that many people know about it, regardless of whether or not they’ve read it. It’s a satirical take on the Russian Revolution, the birth of the Soviet Union and Joseph Stalin’s rise to power – in which animals revolt against human farmers and set up their own Communist utopia. But as Van Badham’s adaptation shows, there are plenty of parallels to modern day politics in the Western world.

Inspired by prize-winning boar Old Major’s dreams of an egalitarian society, the animals of Manor Farm overthrow Mr Jones and establish their own nation state, Animal Farm, led by pig revolutionaries. As time goes by, ideals are compromised, history is rewritten to favour the farm’s president/dictator Napoleon, and the pigs become indistinguishable from their original human oppressors.

With slogans like “Make Animal Farm great”, references to “fake news” and even a distinctive MAGA-style red hat, this contemporary retelling of Animal Farm makes no secret of its commentary on the likes of Donald Trump and his followers. Badham’s Animal Farm also sees the pigs utilising the internet as a propaganda tool – something neither Orwell nor his original version of Napoleon had at their disposal – but 21st century political figures certainly do.

Three talented actors portray all the characters – animal and human – across this hour-and-a-half-long production. Video segments on a big screen are incorporated into the live action on stage. The play is decidedly over-the-top and funny in its ridiculousness – a sobering thought, given the characters are often parroting what real people have actually said.