Two of the best ways to learn about the culture of a place are to visit a supermarket and to learn about their government. While wandering up and down the aisle of the local market asking questions about the various products for sale might get you dirty looks from those shoppers who just want to get in and get out, visiting Parliament and asking questions about different processes is highly encouraged.

Tours of WA Parliament, located in West Perth near King’s Park, are led by members of the Western Australian Parliamentary Education Office twice a week. They are free and very informative, plus you’ll enjoy some sweeping views of the city before you head inside for your tour. When you go in be sure to let the security guard know that you are there for the tour so they can inform the tour guide. When we visited no one else showed up, so we got a private tour into the history and workings of Parliament, but apparently it can be quite busy on other days. 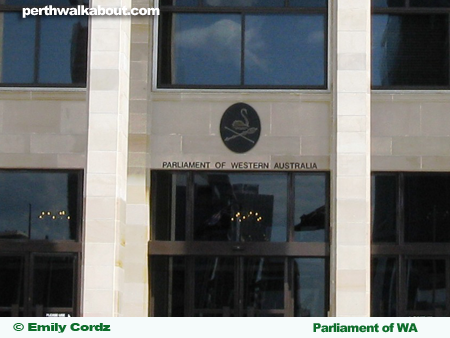 After a few major changes, Parliament began to resemble its modern form in 1893. Since that time there have been small changes to the set up of the two Houses of Parliament account for growth and changes in population density in the electoral regions, but the core concepts have remained the same.

If you tour Parliament on a sitting day you might get to see one of the Houses in action. Be ready to share the view space in the Legislative Assembly as it is quite popular with the media. If you visit on a non-sitting day you’ll get to explore the rooms when the Legislative Council and Legislative Assembly meet. You might even get to sit in their chairs (if you do, choose the second seat in the front row behind the table to the right of the Speaker/President, it is the Premier’s seat). 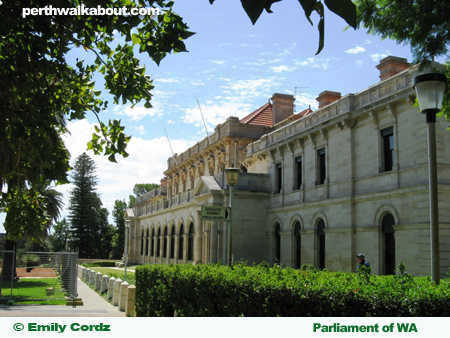 The tours of Parliament run every Monday and Thursday at 10:30am and lasts about an hour. They don’t always start on time, but it is still a good idea to arrive about five minutes before the tour that way they know how many to expect. It might just be you or it might be a large group, it really just depends on the day. There are no pictures allowed and you’ll have to leave any bags at the entrance.

Beyond learning about the history and procedures of Parliament you’ll also get to learn about the construction of the building (which was way over budget and completed in two parts), see paintings that show the changes to Western Australia over the years and learn about the groundbreaking women in Parliament’s history (one of whom is on the $50 note). It is a great way to learn a bit more about the government and Western Australia while you’re out exploring the city and nearby King’s Park.

Catch the Red CAT to Stop 21 (Parliament). Walk down the hill back towards the freeway then turn right at Harvest Terrace. Walk up the hill and head left into the Parliament parking lot. Follow the road around to find the entrance and lobby where you will meet the tour.


From Struggling Colony to Thriving City: A Brief History of Perth