Review - Hara-Kiri: Death of a Samurai in 3D at Luna 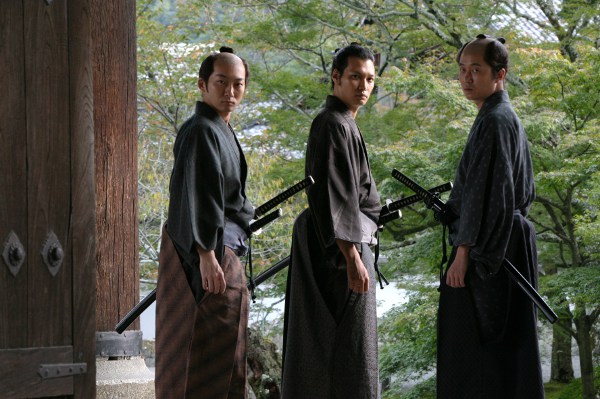 I headed down to Luna Leederville cinema recently to watch Takashi Miike's Hara-Kiri: Death of a Samurai in 3D. Although I usually like to write my reviews within a day or two of watching the movie so I still have everything fresh in my memory, in this case real life intervened and I'm writing this review over a week later. So we'll see whether the delay makes much of a difference in my perspective.

To begin with, I'll start by saying that I thoroughly enjoyed watching this movie. I don't have much experience when it comes to Samurai movies of any type, so I just turned up hoping to watch something entertaining for a couple of hours.

While I was certainly entertained by Hara-Kiri: Death of a Samurai, I was also soon engrossed in a story which was told exceptionally well. I must admit to almost shedding a few manly tears along the way - just as well that I had dark glasses on!

Speaking of dark glasses, let me just mention one of the only two things that I really didn't like about this movie- the 3D effects. First of all, the glasses themselves get uncomfortable to wear after a little while - the edges start digging into your skin. Secondly, the darkness makes the movie even dimmer, and there are several indoor scenes shot in low light where it's very hard to make anything out at all thanks to the 3D glasses. Secondly, the use of 3D effects kept ruining my immersion in the movie. I'd be engrossed in a emotional moment only to have my focus shifted by the 3D effect, drawing my attention to the effect rather than the scene I'm watching. To be fair though, my partner came out of the movie saying that she quite enjoyed the 3D experience, so your mileage may vary. Maybe I just haven't watched enough 3D movies to get comfortable with the whole thing.

And while I'm criticising, I might as well discuss the second aspect that made me groan about this movie - a tiny little cough. While I'm not going to go into specifics, anybody who watches movies knows exactly what it means when a character gives a tiny little cough during a scene. In a film that does a wonderful job of sharing a story without too much melodrama, this little cough felt like the equivalent of being hit over the head with a large plot hammer. Perhaps I'm just getting cranky in my old age? 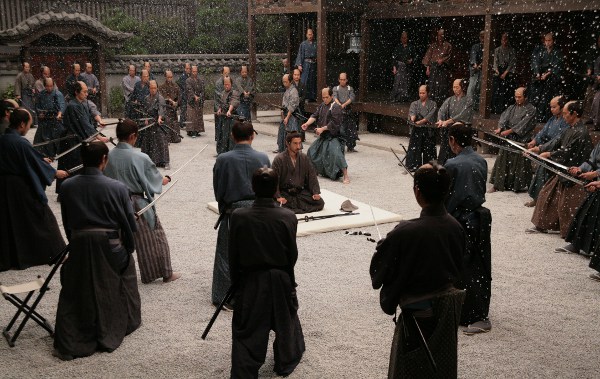 Those two points aside, the rest of Hara-Kiri: Death of a Samurai is a treat to watch. It's not the fairy floss, action packed type of spectacle that we often see in theatres these days (apart from one gruelling suicide scene that I wish I could forget, and one extended fight sequence that kind of bordered on the ridiculous - is it against the rules of honour for multiple opponents to all attack a single opponent at once - perhaps it is a part of the genre that I don't know about?), nor is it the endless navel gazing type of festival film where nothing meaningful happens that I've endured a few times over the years.

Instead, it's a relatively simple story that is presented so well that I enjoyed just sitting back and watching the tale unfold. Most moviegoers will figure out the twists in this story fairly easily, but that really doesn't make a difference - you know where the story is going but you enjoy the performances so much that you really don't mind. And they are great performances - I really did come to feel for the three main protagonists in this movie as they supported each other and struggled against the whims of fate.

As I mentioned earlier, I'm no expert when it comes to Japanese movies, samurais or the concept of bushido, so I'm not speaking from a position of authority. But I feel that Miike gets across the idea that the inflexible samurai code followed by the samurais of House Li lacks humanity, putting honour above people. When you get to the point that following the rules of a code of life become more important than looking after your fellow man, you know that something is very wrong with your society, whether you are in Feudal Japan or modern civilisation.

The final scene where the Lord of House Li returns to hold an audience with his warriors, and with one dismissive word demonstrates just how little he is concerned with the values of honour held by his retinue, is almost worth the price of admission all by itself. A whole movie concerned with the samurais' obsession with honour and upholding a warrior code, all shown to be of trivial importance to their masters. It's a scene that is still vivid in my memory over a week later.

Bottom line: Hara-Kiri: Death of a Samurai is a simple story with deeper meaning, that is told exceptionally well by the director, actors and actresses. I'd recommend this movie to everybody with a decent attention span who thinks a great movie is more than just a flurry of action sequences and surprise twists. Even in 3D, it's well worth your time.

Movie: Hara-Kiri: Death of a Samurai in 3D

Showing from 21 March 2013 at Luna Leederville and Luna Outdoor