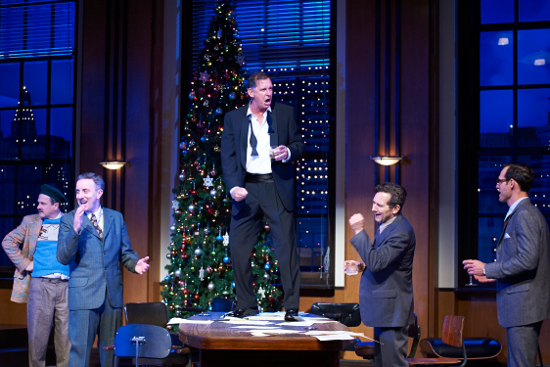 Black Swan State Theatre Company brings to Perth audiences Laughter on the 23rd Floor. The play is set in the writers room for the Max Prince Show, located on the 23rd floor of New York's Rockefeller Plaza, way back in 1953. The looming shadow of McCarthyism and the Hollywood blacklist bring an extra layer of dramatic tension to Max's struggles with his TV network bosses, who want to make cutbacks and dumb down the show for the masses.

They say that great tragedy makes for great comedy, and nothing is a better example of this than Laughter on the 23rd Floor. On paper, it seems like the blackest of comedies - watching the star of a TV show disintegrate in a cloud of booze and drugs, while his writing team fight among themselves to win his approval by one-upping each other at every opportunity. But although tragedy makes its mark, there are plenty of lighter and zany moments in playwright Neil Simon's script, which is brought to vivid life by the cast and crew of Black Swan State Theatre Company.

Within the writer's room (another terrific set design by the crew), Simon brings to the table a number of different comedy styles and lets them butt heads. We have the “buy in bulk” approach of Milt, the dry wit of Kenny, the master of the putdown Brian, the foreigner Val, the room's stirrer in Ira, and so on. With the sheer volume of jokes and wisecracks in the play, Simon is able to give each character plenty of good lines, and it's quite a change viewing a play where there is only one “straight man” character in the whole cast.

It's a hoot to sit and watch the writers bounce ideas, jokes, and even their bodies off each other, but the play relies on the character of Max Prince to tie everything together. Peter Rowsthorn rises to the challenge as Max – and from the moment he steps on stage there is no doubt that he is Caesar (Sid!?) to their Romans. Peter is a treat to watch as the star performing talent in a room full of funny people.

Given the fast and furious nature of the show's dialogue and action, the cast do an incredible job with their timing – they have the flow down just right, which is quite a feat considering the number of jokes that have the audience roaring in laughter.

Looking back at the sad effect of McCarthyism and the Hollywood blacklist on the American entertainment industry and its people during the 50's and onwards, it's nice to think that in the modern days of cable TV and the Internet intelligent comedy can continue to be created and performed for those of us who have had enough of reality TV to last a lifetime. It goes to show that the TV networks idea of “Just give them shit” hasn't changed much in 50 years. Thankfully, people like Neil Simon and the Black Swan State Theatre Company are doing their bit to keep the flame burning (even if it is the writer's table!). And I'm “fine” with that.

To get the inside scoop on upcoming events at Perth, follow us @PerthWalkabout