Pool (No Water) at the Actors' Hub 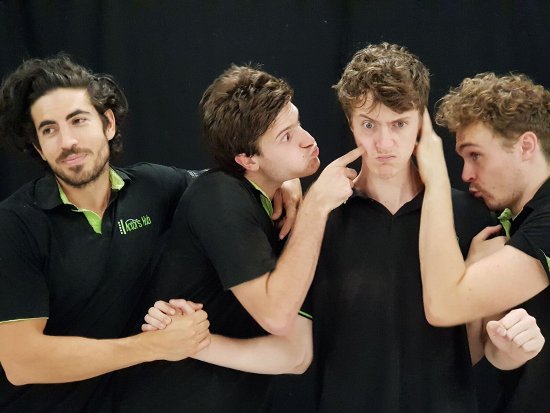 I didn’t know what to expect when I walked into The Actors’ Hub for the first time, but I was immediately welcomed in and invited to take a seat and have a drink. A duo performed live acoustic songs in the foyer while we waited for the show – delayed slightly due to some technical difficulties – to begin.

The group tells us, the audience, a story in first-person plural. They are deeply resentful of their “friend” of 10 years, a fellow artist – referred throughout the play as “She” – who has made it big while they continue to struggle. “She” now lives comfortably and has invited the group over to her house for a dip in her pool. When a sickening accident puts her in a coma, the group instinctively seeks to turn her suffering into art.

The simple set – a white square with seats along each side – allowed for an immersive experience and interaction between the actors and audience members. Allen, Droppert, Dunstan, and Tomaszewski threw themselves – quite literally – into their physically demanding, often acrobatic roles; at times, I worried they would injure themselves.

Their delightfully exaggerated “artsy” accents also injected dark humour into this fascinating and somewhat disturbing take on jealousy and exploitation.