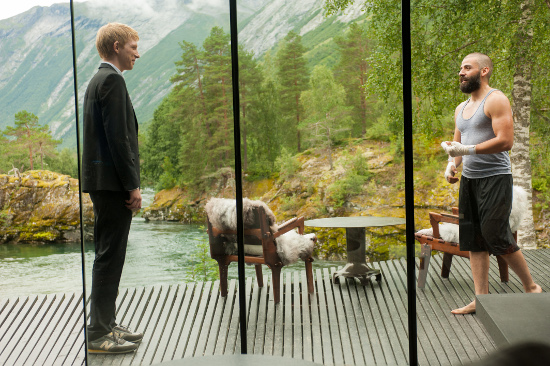 Ex Machina - a movie about Artificial Intelligence (AI) will hit the screens at Luna Leederville in Perth this Thursday 7 May.

Through the ages there have been many different stories based on the brilliant but short sighted genius who risks the future of mankind in the persuit of knowledge. Ex Machina is the latest spin on this familiar tale, but instead of forbidden occult secrets, biogenic weapons or alien life being the agent of humanity's destruction, this time it is robots with artificial intelligence.

While the premise is as old as storytelling, Director Alex Garland has created a visually and intellectually compelling version of mankind's downfall. Genius programmer Nathan (actor Oscan Isaac), creator of Bluebook – the #1 search engine of the future, is obsessed with creating an AI that can pass the Turing test, and brings in young hotshot coder Caleb (actor Domhnall Gleeson) to his remote wilderness bunker to do the testing.

All the usual beats for such a story are there – the brilliant but obssessed genius that overlooks something obvious that leads to disaster, the well meaning but in the dark hero who struggles with moral and ethical issues before intefering and making things worse, and the creepy but attractive robot who has an agenda of her own. But what is interesting is that many of the usual plot devices that modern audiences would expect in such a movie are introduced then purposefully discarded or tweaked by the director – issues like the genius monitoring the hero and robot during the suspiciously convenient blackouts, or whether the AI is capable of pretending to feel emotions to manipulate humans. One thing I was thankful for was the lack of the usual angst about whether a robot with enough AI actually has a soul, Ex Machina is a better movie for not having it.

With great acting performances all round, terrific set design and great but restrained special effects, Ex Machina is compelling viewing and thoroughly enjoyable. The technology handwave to make it all possible is plausible enough, and the technobabble is kept to a minimum.  I have only one minor quibble regarding the plot, which I will put in a spoiler below (scroll to the bottom of this page) for those of you who would prefer not to know in advance, but this small irritation certainly isn't enough to stop me from hoping that Ex Machina 2 will be coming soon.

Greg Letts is a ppc marketer and guide dog puppy raiser by day, and an entertainment reviewer by night.

This month on Perth Walkabout - we'd love you to support "Team Harry" on our HBF Run for a Reason - Jog 4 a Dog journey to raise funds for the next guide dog puppy for Guide Dogs WA.

Wouldn't a computer genius like Nathan automatically put a remote kill switch in Ava and the other AI's? If you've got robots that are going mad in your testing, and you've made them human looking and mobile, wouldn't being able to turn them off in an instant with a code word or remote control be kind of important?