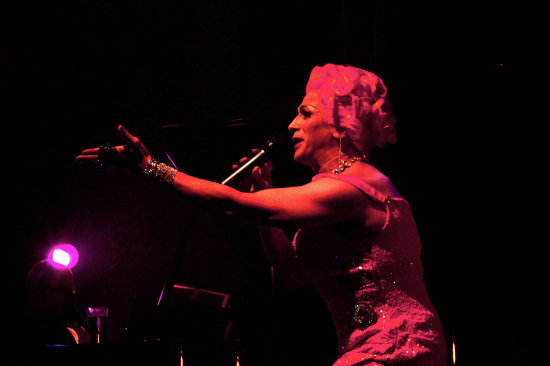 Candy Chambers has finally arrived in Perth for the 2014 Fringe Festival, after having wooed and won the crowds at popular festivals such as the Adelaide Feast and the Adelaide Cabaret Festival. Just fresh from performing her show in Sydney, audiences in Perth are lucky to have Candy perform as part of the Fringe Festival.

Director David Paul Jobling is the man behind the curtains - actually the man in the front row as he and Candy bounced off each other playfully during the show.

Arriving slightly early at Connections nightclub in Northbridge for the opening night, we headed to the lounge bar for a drink on the balcony, enjoying the city skyline with pretty coloured lit lanterns swaying around us. Then it was off to the show with the stage set for the cabaret star to make her grand opening.

Candy hit the stage dressed in a figure hugging glitzy red tinselled number, beginning with some light hearted songs to warm up the audience. As Candy settled in for the night on stage, the crowd were appreciative as they sang and cheered along with her.

The synergies between Director Jobling and Candy are amusing, with reference made to Candy having just come out prison, and Director Jobling being her probationary officer. Jobling cajoles Candy along to keep telling her story to the audience.

Behind the banter and light heartedness, Candy reminisces about her life – the ups and downs, how hard things have been – the crowd lapped it up, and yelled for more. She glistened in the limelight as she sung her way through her repertoire. The audience willingly participated in a song and dance or two, amidst much laughter and joy, accompanied by Candy’s fantastic four piece band.

She shares some wise words of life’s lessons with the audience, from being a dancer to having retired from her previous career in adult entertainment. Her philosophy on life such as:

The performance of Candy Chambers is a bright spark at this year’s Fringe World for the cabaret section. As we watched the show reach a climatic ending and as the curtains went down, we bid Candy farewell, for this year anyway, with the audience having spent a memorable evening with the star of the show.

With only 2 performances to go, this Friday 14 February and Saturday 15 February, get tickets before they sell out, to watch Candy Chambers celebrate being Fifty Forever. If you are looking for a fun and uplifting night at Fringe World, with some playful banter and a solid gold cabaret performance, go find out what Candy has in store for you.  She tells her colourful story through song and dance, from the perspective of the rehabilitated but still naughty Candy Chambers…right on Candy! Love those moves.

Nita Teoh pens her passion for Perth at Perth Walkabout. Stay tuned about upcoming events in Perth, and follow us @PerthWalkabout