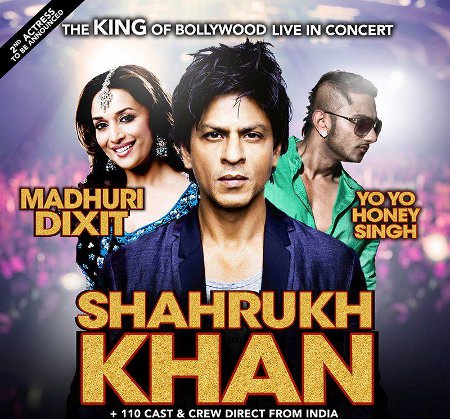 For Bollywood fans in Perth, the evening of Wednesday the 9th of October was all about three letters: S – R – K.

The King of Bollywood (that’s Shahrukh Khan for the uninitiated) and his trio of screen-queens – Jacqueline Fernandez, Rani Mukherjee and Madhuri Dixit, all held court for a three-hour-plus Bollywood extravaganza in our city. Joined by Punjabi rapper Yo Yo Honey Singh and Indian Idol alumni Meiyang Chang who emceed, the three Bollywood icons and the debutante (Fernandez) lit up the stage, all accompanied by over a hundred dancers from India. The show, choreographed by Geeta Kapor, was a big coup for Perth, having only been performed in Auckland and Sydney.

As the chants of “SRK” filled the arena, it was the young Fernandez who took to the stage first, performing a medley of recent Bollywood hits, including the raunchy Fevicol Se and her own item number Lat Lag Gaye from the film Race 2. It was then time for the beautiful Rani Mukherjee, who, dressed in a slinky silver bejeweled bodysuit performed a medley of hits from her countless films including Chalte Chalte and Kuch Kuch Hota Hai. The seemingly ageless magical Madhuri Dixit then took to the stage where a sea of dancers covered in a white sheet lifted her to the skies as she performed the romantic hit Morey Piya from Devdas. She then performed countless hits from her illustrious career, including the coquettish classic Choli Ka Peeche Hai? and her latest item number hit Ghagra from her cameo appearance in Yeh Jawaani Hai Deewani.

Then, the lights dimmed and to screams from the audience, a montage of Khan’s smash-hit films (too many to count) readied the audience for the arrival of the world’s biggest movie star. The King appeared on stage, flanked by lit-up flowers with the words “King Khan” emblazoned across them and after performing a medley of his hits, he took to the microphone to welcome the audience and thank them for their years of support.

After assuring audiences they were in for a late night, Khan declared it was time to “get to know the audience” and invited some lucky audience members on stage, including Sasha who was showered in kisses and flowers and taught how to say ‘I love you’ in Hindi; newly-engaged Alisha and Shane who were blessed for their soon-to-be married life (after Khan jokingly forced the non-Hindi-speaking Shane to refer to Alisha as his sister) and Prince, who was coerced into wearing a lunghi and performing the eponymous hit Lunghi Dance from Chennai Express with Yo Yo Honey Singh and Khan.

Living up to his reputation as a consummate entertainer, Khan was equal parts comedic and charming. The live musical interludes of the night, provided by Yo Yo Honey Singh’s raps and Meiyang Chang’s sing-a-longs were certainly entertaining, but in the end, it was Khan that everyone was there for. As the night drew to a close, the handsome star performed some of his greatest hits from Dilwale Dulhania Le Jayenge and others with the each of the female stars, before the title-track from his 2007 blockbuster Om Shanti Om began and the stars all joined together for the finale. As Khan and his bevy of beauties were raised to the roof on a circular platform there was no doubting the star-power in the room.

For those who came simply to marvel in the magic of Bollywood, there was plenty of dancing, pyrotechnics, extravagant costumes and hit-songs, but for the majority, who came to spend some time with Bollywood royalty, Temptation Reloaded delivered. The King and his queens ensured the night was one to be remembered and if any doubted the Badshah of Bollywood’s abilities to hold an audience in the palm of his hand, there was only one answer – Shahrukh can.