Theatresports 2013 Grand Final - Who Will Win the Coveted Cup? 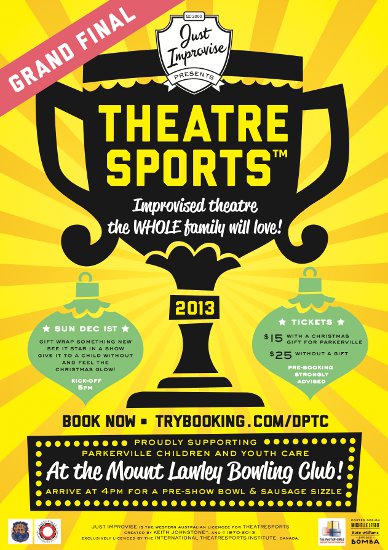 It's finals time! It's your last chance to come and scream for your team in 2013 – as improv veterans & rookies battle it out to win the coveted WA Theatresports Championship Cup.

The Theatresports 2013 Grand Final will hit the stage on Sunday, 1st December at the picturesque Mount Lawley Bowling Club. As an audience member you will get your chance to keep the performers, comedians and game punters thinking fast on their feet with your suggestions. There will be a pre-show lawn bowl and sausage sizzle from 4pm, with the show commencing at 5pm.

See it star in a show

Give it to a child without

And feel the Christmas glow!

Theatresports, created by the legendary Keith Johnstone, is the original improvisation competition. It throws performers, comedians and game punters quick challenges, requiring teams to think fast and act ever faster as they perform scenes and scenarios inspired by audience suggestions.

Directed by Just Improvise's Chris Bedding and Esther Longhurst, the show promises to be an festive evening of improvised theatre the whole family will love - inspired by your Christmas gift donations for Parkerville Children and Youth Care.

The teams competing in the 2013 Grand Final challenge consists of:

MC's Esther Longhurst and Neil Barnard will be at the helm to make sure that it is an entertaining and fun night for all.

$15 with a Christmas Gift for Parkerville

Proceeds: All profits and gifts will be donated to the
Parkerville Children and Youth Care Christmas Appeal.

Tickets now on sale through www.TryBooking.com/DPTC